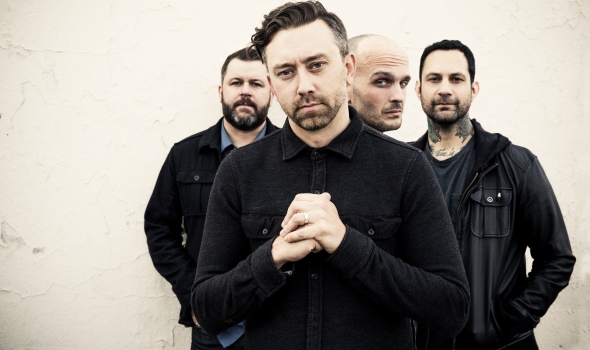 “It would’ve been very easy to bitch about Trump, and have a negative overtone, but we didn’t want that.” Rise Against has always been a politically-charged, punk-rock outfit – so it’s no surprise that when Donald Trump was elected President of the United States, it had a big impact on the work.

“It definitely changed the direction of the record,” the band’s bass guitarist and co-founder, Joe Principe says of Trump’s win. “We started writing the record pre-election, and we were in the studio when Trump won, when we found out he was the president-elect. And Tim, who writes all of our lyrics, he took a step back and rewrote some things.”

What the record would’ve sounded like in the event of a Clinton administration is a mystery to everyone except Tim McIlrath. The lyricist had shared very little of his work before the album, and world, shifted.

“Musically, it was the same, the music was there, but lyrically, I’ll be honest, I’m not sure. I heard two songs pre-election, ‘House on Fire’, which is about Tim’s daughter, and ‘Bullshit’, which both have nothing to do with the election.”

Though not usually a band to shy away from melancholic political statements, Rise Against’s seventh record, Wolves, developed into a more uplifting narrative than the initial change of politics inspired.

“We didn’t want a doom and gloom record – just wallowing – we wanted a sense of hope, we wanted to feel a sense of empowerment,” Principe says.

The bassist points to the record’s title track for the best example of Wolves’ tone and themes. “It’s a song of empowerment, that our voice needs to be heard, and that there’s strength in numbers. That sums up the record, not every song is political, but the songs that have a positive spin.”

Rise Against have their roots firmly in the punk scene, starting out in the ‘90s and early 2000s, yet they’ve always had a knack for bleeding their very political work into the mainstream. It’s something that Principe attributes to the hard grind of starting out as a band, and the work ethic that develops from that kind of lifestyle.

“Playing in people’s basements and sleeping on people’s floors, it made us have thicker skin, and it helped us form valuable relationships in the music scene. There are people I met 25 – 30 years ago that I’m still friends with because of music,” Principe says.

It’s a lifestyle that’s less common as time goes on, and Principe argues that this is to the detriment of musicians. “Generally speaking, I feel like more and more bands are missing that experience of starting from the ground up. They have the internet at their disposal, some bands are signed before they even go on tour. We would’ve imploded if that had happened to us.”

Tapping into the joy of being a punk hardcore kid prompted the band to be mindful of those core, basic values that make the punk scene so adored and unique. Encouraging inclusivity and kindness, all members of the band have been vocal about the zero tolerance they have for hateful and toxic behaviour at their performances.

In the lead up to the release of the record, McIlrath said “In many ways, a Rise Against show is a safe space for our fans. But I want to create dangerous spaces where misogyny can’t exist, where xenophobia can’t exist. I want to create spaces where those sentiments don’t have any air, and they suffocate: where those ideas die. Wolves isn’t about creating a safe space, it’s about creating a space that’s dangerous for injustice.” It’s a sentiment that Principe echoes. “The whole reason why I got into the punk rock scene was because I felt like I was an outcast in the mainstream world, and when I found that scene and went to those shows, I felt I was with like-minded people, that this was a safe haven,” Principe says.

“If you’re going to bring homophobia, xenophobia, there’s no place for it. It’s not welcome. This is a safe haven. And we want that to be known. It’s 2017, we want to make sure people know it’s a safe haven, people can be who they want to be. Gender, faith, it doesn’t matter.”