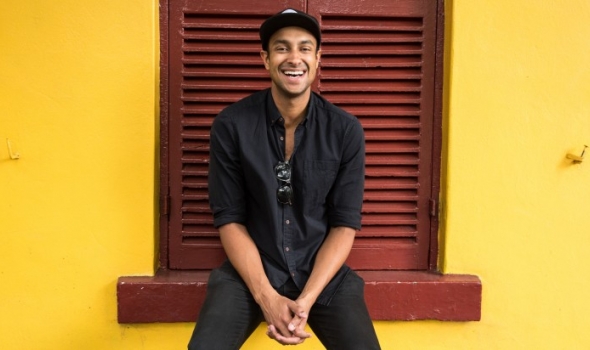 In the quest to avoid complacency, Matt Okine has worn many hats. The last few years have seen him move between mediums, from radio airwaves, free to air television, and subscription streaming service, Stan.

Although he’s conscious to never get stuck doing one thing, comedy keeps drawing him back. The Hat Game is his seventh stand up show, and he’s got no plans to hang up that particular cap.

“[Performing comedy] is just something that I continue to look forward to, every night, over and over. It’s so exciting to go up on stage and just talk shit to audiences from all over the world,” says Okine. “Radio, it just sort of goes out into the world, and really you’re just two idiots in a room talking rubbish. With standup, you’re still one idiot in a room talking rubbish, but at least there’s 300 other people that are going along for the ride as well.”

All that Okine loves about stand up comedy is a stark contrast to the qualities of radio, a medium through which many may have first discovered Okine’s voice. Alongside Alex Dyson, Okine presented Triple J’s prestigious breakfast slot from 2014 to 2016, before leaving at the height of the show’s popularity. “I don’t want to get stuck in one place; it wasn’t because it stopped being fun. Alex and I felt like the show was in a really good place and we didn’t want to lose that spark.”

That being said, Okine is quick to point out he’s not ruled out the possibility of jumping back in the booth alongside his on-air partner. “Alex and I talk about it all the time. I think it’s more a question of when rather than whether we will. But who knows, I might end up in LA working in a coffee shop as another failed actor.”

So far, however, his acting career is far from a failure. Okine co-wrote and starred in the Stan series The Other Guy, an adaption of his award-winning semi-autobiographical stand up show of the same name. The experience of creating a show that pushed the boundaries with its approach to sex and relationships has coloured his latest stand-up show in a way that he admits is a little more risqué than his usual style.

These changes are what drive him, living and dying by his own sword – even if that sword is simulating orgasm on stage.

“I wanted to make a show this year that feels like a Matt Okine show, but doesn’t at the same time. There are people that have seen every single show – there’s this girl, Dani, who comes every year with her mum, and when I’m writing a show I always think about someone like Dani…because I don’t want her to feel like she saw this show three years ago. I feel there’s a real ability for comics to do that, to basically rewrite the same recipe using slightly different ingredients.”